Much has been written about Hitler’s interest in classical antiquity and its appropriation under National Socialism, but the question that has not been asked is: do the rhetoric/propaganda and classical aesthetic match the practice among the Nazi elite of collecting antiquities? It would seem evident that ancient art would have been much desired by Hitler and the upper echelons of the Nazi party, been on center stage in “art as politics” under National Socialism, and been sought after in the quest for great works of art for museums in the Reich. Yet, there is only limited evidence to show this was the case. In this illustrated lecture, Dr. Romano will explore what we know about the ancient collections of Hitler and Göring, as well as those acquired for the so-called “Führermuseum” envisioned in Linz, and will attempt to explain the discrepancies between National Socialist ideology and the reality of the collecting of classical antiquities in the Nazi period. 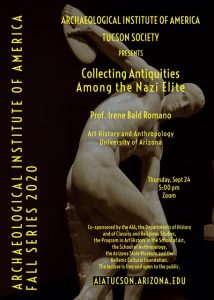