“Exploring Ancient Landscapes in the Mountains of Arcadia” by Mary E. Voyatzis, sponsored by the UCLA Niarchos Center for the Study of Hellenic Culture

Location: Via Zoom. Please RSVP to hellenic@humnet.ucla.edu to receive the link

The mountainous region of Arcadia, situated in the heart of the Peloponnese, has attracted considerable interest and attention since antiquity. Many ancient authors described Arcadia in detail, discussing its rich mythology, many sites, unusual gods, numerous sanctuaries, engaging history, diverse geography, and the important fact that its inhabitants were indigenous, living there even before the moon (Proselenoi), and the original inhabitants of Greece (Pelasgoi). During the Renaissance, Arcadia was depicted in art as a beautiful, pristine, and magical place with unspoiled wilderness. By the 19th century European travelers were exploring the region, and later in the century archaeologists began excavating its various sites. For over 140 years Arcadia has been investigated by archaeologists from Greece and many other countries in Europe and North America. Today we consider some of the sites recently excavated in Arcadia, and focus on two where the speaker has been involved, the Sanctuary of Athena Alea at Tegea, and the Sanctuary of Zeus on Mt. Lykaion. We shall see how archaeological discoveries have contributed significantly to our understanding of the history of Arcadia and enhanced our appreciation of this enchanting mountainous region. 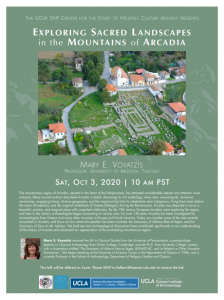